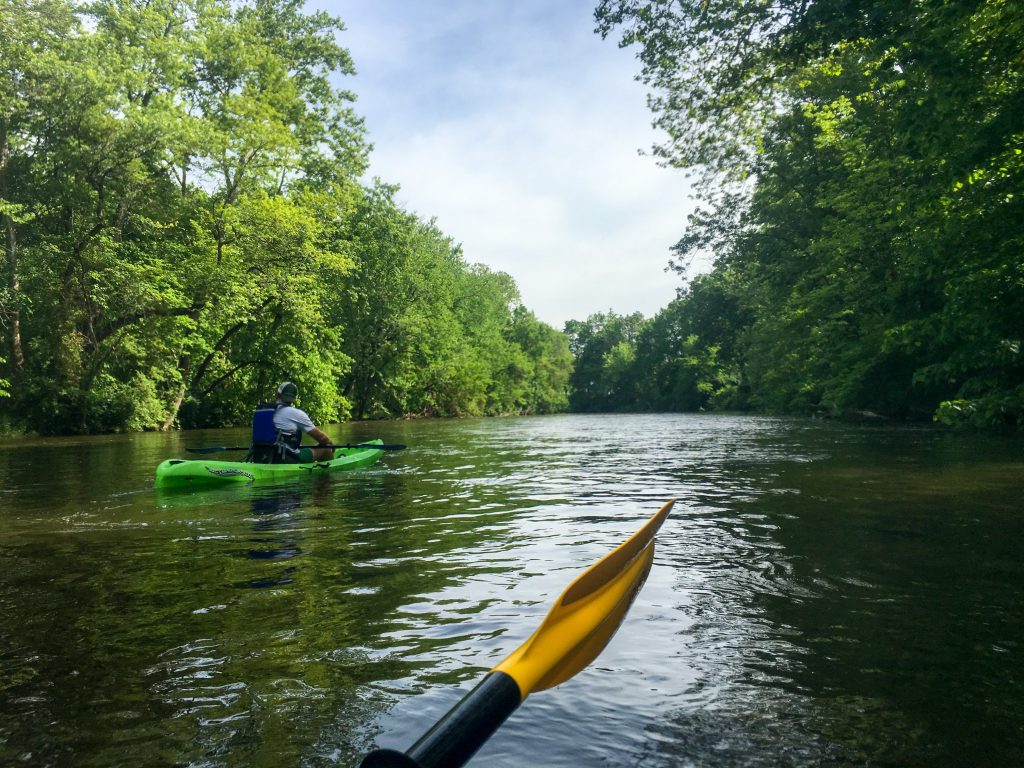 The beauty of the Elkhart River isn’t that it’s just one thing.

Stretches are rural and secluded. Others are lined with houses or go under major highways.

The river flows, often with mild current between the Goshen Dam and Ox Bow County Park between Goshen and Elkhart. For beginner or experienced kayak or canoe paddlers, the river is the perfect place to quench a thirst for some time on the water.

I’ve paddled the river from the dam to just past Ox Bow with friends several times. We toss our boats into the water at the base of the dam and start paddling. 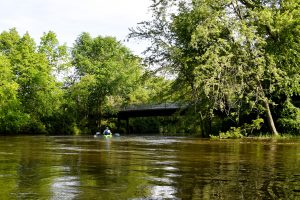 The Indiana Department of Natural Resources says it takes five hours from Waterford Mills, a bit upstream from the dam. That includes a portage around the dam and could include portaging around downed trees in the river, particularly between the dam and Shanklin Park.

Due to heavy rains in late May and early June, a float from the dam to just past the Dunlap park took friend Andy Wesdorp and me just over two hours on the first Saturday of June. I can’t speak to how long it would have taken on the next day or the following week. The beauty of the Elkhart River is that it’s constantly changing.

On this cool and hazy morning, the water was flowing fast. A few spots early in the trip felt a bit like mild whitewater as downed trees or branches necessitated paddling fast to direct the kayak through a “hole,” a spot where the water runs a bit faster. Whitewater paddlers attack these for the adrenaline rush and seek out water that has more of them. The Elkhart River doesn’t have many, but being on a river, with its current, demands attention in a way that being on a pond or lake doesn’t.

That’s part of the beauty of a river. It’s both from there to here and from here to there.

Along the way, there were dozens of turtles sunning on logs. Or at least they were until they spotted boats and paddlers and plopped into the water. This is the time of year when turtles are making their way onto shore to lay eggs as well. The river is also home to geese and ducks, swans and herons. A heron that serves as a scout, flying from tree to tree ahead of where your paddles enter the water, is a beautiful, graceful sight, a joy to behold.

Sandhill cranes nest along the river and river otters are taking up residence in and along local waterways, said Steve Hrynewycz, fishing advocate for Jackson Kayak Regional Fishing Team and one of the Elkhart County paddling gurus at Fluid Fun, a Bristol business that sells equipment including canoes and kayaks. 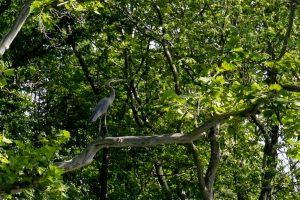 I haven’t wet a fishing line in the river, but talking to Hrynewycz makes me want to. Some of the fishing holes are a dozen feet deep in the river that’s usually four- or five-feet deep, he said. Bass, pike, walleye, catfish and more swim in the waters. The clarity of the river is much better since local governments have taken steps to control wastewater overflow and he would eat fish out of it now, he said.

The river winds its way past two parks in Goshen: Shanklin and Rogers. Both are potential put-in or take-out points for paddlers. Ox Bow has a small, sandy beach that can serve as the same.

Between them are a number of railroad trestles and bridges that are fun to go under. Being below the bridges, backyards and towering Old Bag Factory smokestack offer a different perspective on this neck of the woods, this place where we live. That’s the true beauty of a trip in a boat down the river. It’s a different pace, a different way to travel, and what you see is different than usual. No matter where you started or where you’re going, that’s really what makes it delightful and why we venture.

Marshall V. King is a freelance writer based in Goshen, Ind.

What you need to travel the Elkhart River

• A boat (and paddles and personal flotation devices). Kayaks can be easier to get around downed trees, but either kayaks or canoes will work. Goshen Parks & Recreation, 607 W. Plymouth, (574) 534-2901, offers a trip for $20 a canoe (plus deposit), leaving from the parks office and ending at Ox Bow County Park. Departure time is 10 a.m. and pickup is at 2 p.m. A 48-hour advance notice is required.

• A camera (and something to protect it). A plastic bag can keep a phone or camera dry, but you can go fancier if you want. Either way, you may want to snap some photos.

• Transportation. Unless you have livery service, you may want to drop a vehicle at the start and end of your trip to ferry people and boats as needed.

• Sandals and shorts. You may not get wet, but you may. It’s easier to get in and out of boats if getting jeans and socks wet isn’t something you’re trying to avoid.

• Sunscreen. Though the river is shaded much of the way, you may be in the sun enough to necessitate this one.