Some call it a woods, others a farm, but maple sugar producers call their production area a “sugar bush,” or “sugar camp,” and Indiana’s second annual Maple Weekend will open sugar camps around the state so guests can see how trees are tapped, how sap gets to the sugar house and how it becomes maple syrup and other maple products. 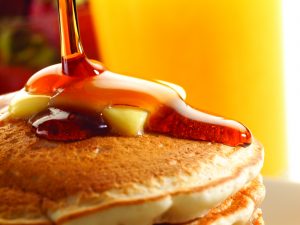 Eli Kuhns, owner of Kuhns Farm, will demonstrate custom maple syrup cooking using evaporators and finishing equipment his family uses in extensive syrup production. Guests will see modern sap collection and how advances within the maple industry are helping to revive a lost American tradition. They also will smell and taste syrup hot from the evaporator, enjoy the free tour and be able to purchase the freshest-possible maple products.

The full Maple Weekend schedule, with locations and hours, are posted on the IMSA website, at www.IndianaMapleSyrup.org.  Details also are on the “Indiana Maple Syrup Weekend” Facebook page.

Indiana is one of the southwesternmost states in the U.S. Maple Belt, and because spring’s warmth causes sap to flow, it flows here first. Maple Weekend will be an outdoor activity to beat cabin fever, one that will encourage guests to meet Indiana syrup producers — called sugar makers, to see where food comes from, how it is produced, and to learn the difference and value between maple and pancake syrup.

“Maple Weekend is an opportunity for people to see what we do and how we do it, and to increase awareness of Indiana maple products,” said Dave Hamilton, president of the Indiana Maple Syrup Association and past president of the North American Maple Syrup Council. Based in New Castle, Hamilton is the third in a five-generation syrup-making business started by his father-in-law.

The event will involve sugar makers with sugar camps able to accommodate visitors, however most venues will be rustic, and all will be muddy due to the spring thaw impacting the ground as much as the sap flow.  “Guests should dress appropriately for an outdoor, spring event and expect an eye-opening experience,” Hamilton said. “Sugar making is a lot of fun for anyone who enjoys being outdoors in the early spring, and we encourage guests to visit two or three sugar camps in their area.”

Sugar camps operate differently, so those who have seen one, certainly have not seen them all.  Some sugar makers collect sap in buckets and move it to the sugar house by hand, however many use tubing. With tubes running from tree to tree throughout the woods, some sap is gravity fed to a collection point. Others use vacuum pumps to move thousands of gallons of sap to their evaporator – some being top-of-the-line stainless steel machines, others handmade and used by generations of the same family. Sugar making in Indiana tends to be a family tradition, with many in the third, fourth and fifth generations of the activity.

Maple sugar production is completely weather-dependent, so what guests will see at Indiana sugar camps during Maple Weekend will vary. Two consistencies will be wonderful stories of tradition, along with the fascinating process of turning 40 gallons of sap into one gallon of syrup.

After learning about sugar making, you can enjoy maple syrup and more at the Wakarusa Maple Syrup Festival, which will be April 28-30. The event includes a free sugar camp tour each day of the festival as well as all-you-can-eat pancakes and sausage.

The Indiana Maple Syrup Association celebrated its 25th anniversary in 2015. It is comprised of nearly 150 Indiana syrup producers, with strong representation from the central and northern parts of the state, where larger maple stands grow naturally. Centuries ago, American Indians were the first to make maple sugar on land now known as Indiana. IMSA welcomes anyone as a member, including syrup-making hobbyists and those simply interested in the history, process and product. There are 14 states in the U.S. Maple Belt, and Indiana “sugar makers,” as they are called, produced 12,000 gallons of syrup in 2016. IMSA’s largest presence is in the Pioneer Village throughout the entire run of the Indiana State Fair, where since 1993 members have sold pure Indiana maple syrup, maple candy, maple cream, and maple sugar from its “Sugar Shack.”  Its second-largest annual program is Maple Weekend.