By Dave Foutz Autumn in Elkhart County, to my way of thinking, is unparalleled for breathtaking vistas of fall foliage. How better to take full advantage of it than from the seat of your bicycle, riding with good friends? 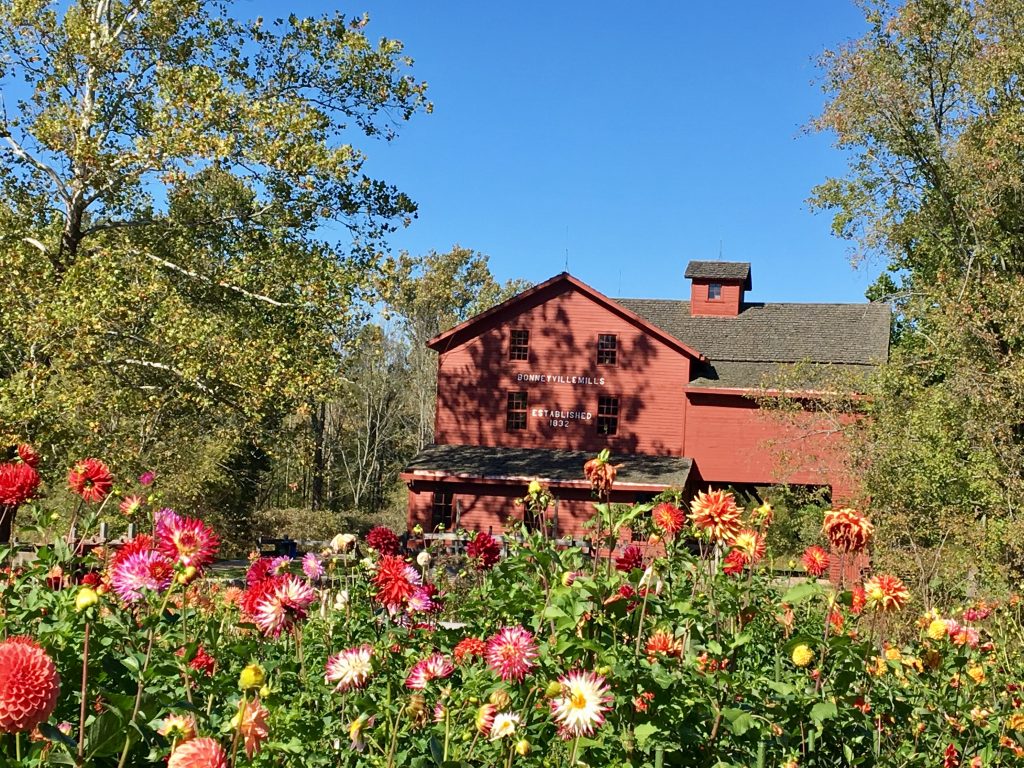 Well, maybe there is a better way. What if you planned your route so that you could make strategic stops at three of our fine local microbreweries to rehydrate? Yes, that would definitely be better. So it was with this plan I set out to convince two other retired senior citizens, Gary and Dick, that this is something we should embark on. Not surprisingly, they were on board. 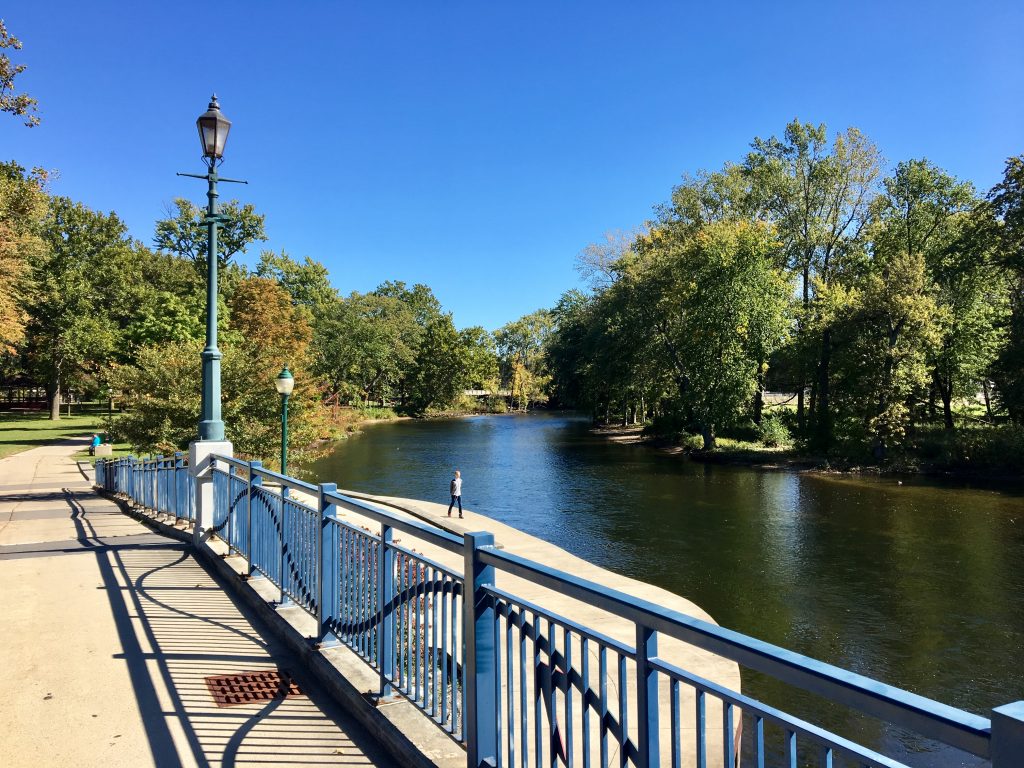 Elkhart County is blessed to have a network of bike routes composed of paths, bike lanes and shared routes that makes a 40-mile loop through four of our municipalities. Three of these have microbreweries near the route and the fourth town is just plain delightful. This route has three distinct legs that more or less follow three intersecting rivers, enhancing the scenic quality of the ride. So the plan has been hatched, commitments made, and all that is left is do the deal. 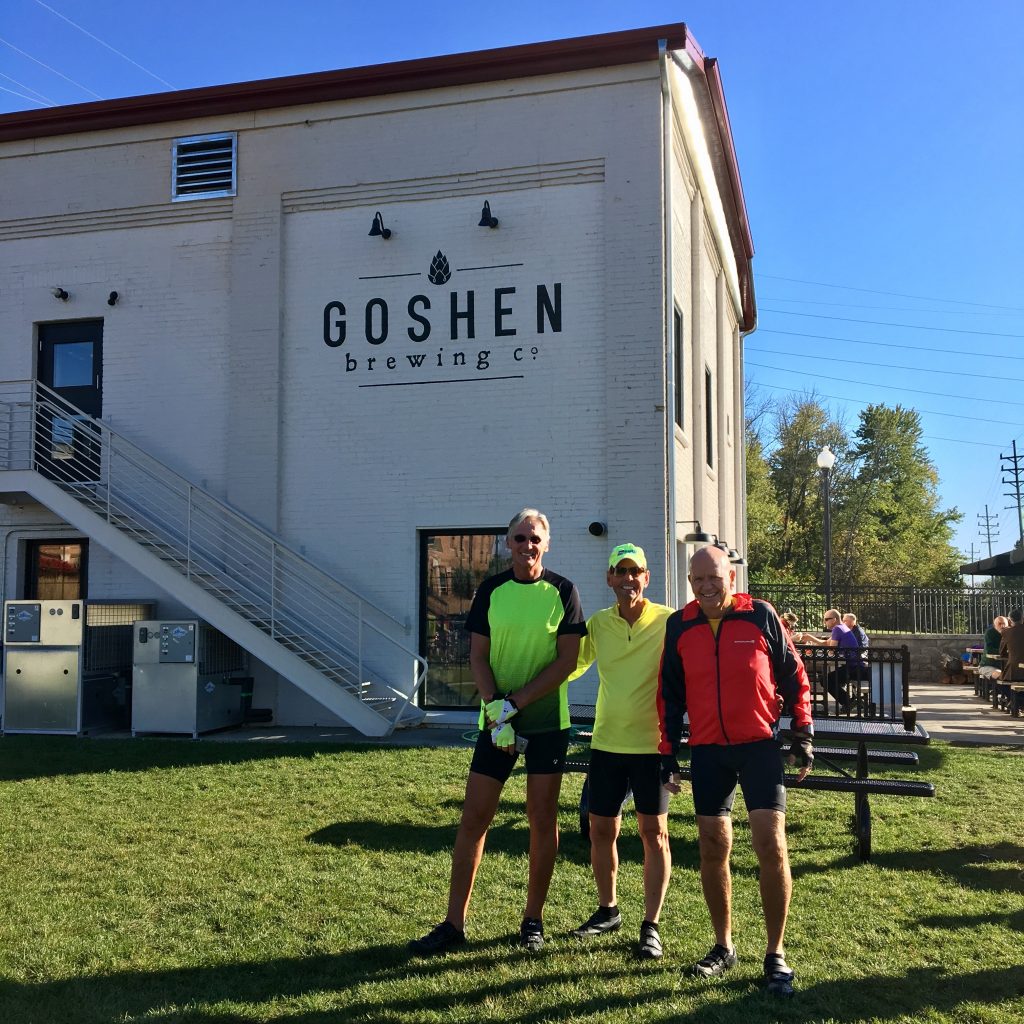 So late morning on an absolutely cloudless, 60-degree Friday, we drove to Goshen and spotted our car at the Goshen Brewing Company, where we will ultimately savor our final libation. After a short ride, crossing the Elkhart River in Rogers Park and again on the 1919 historic iron bridge, we connect with the MapleHeart Trail just west of Oakridge Cemetery. This is our first leg - 11 miles in length. This part of the ride is almost entirely on paths and dedicated bike lanes connecting the cities of Goshen and Elkhart. Ox Bow County Park, one of the most picturesque of the county parks, is situated along the Elkhart River at the halfway point on the first leg. Past the park the route becomes more populated. We enter the Elkhart city limits and, as we reach downtown, we connect with the RiverWalk. 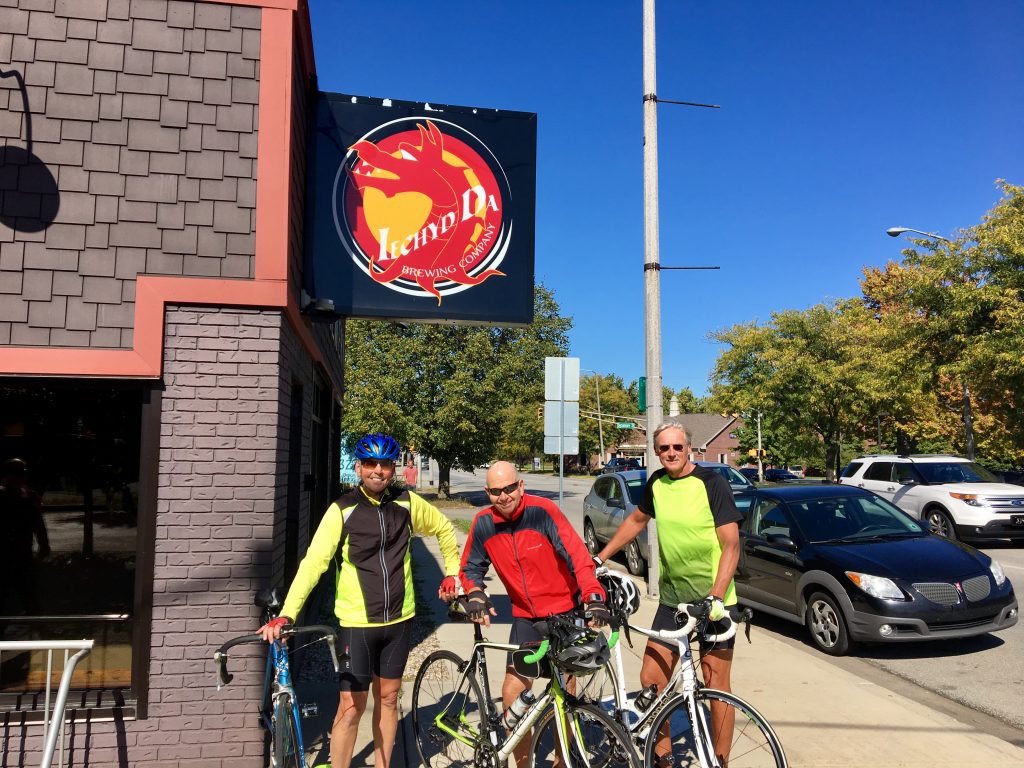 If you know where to look, Chip and Summer Lewis’ Iechyd Da Brewing Company, 317 N. Main St., Elkhart, is within sight of the path.

The name, Iechyd Da, is a Welsh toast that means good health. Welsh is also the theme of the decor, which is a kind of pub-industrial fusion. This is also our lunch stop. It was strategically planned by Dick and I, who knew that the black and bleu meatloaf sandwich was on the menu. Gary chose the Cobb salad. He said it was great, but really? When you could have had meatloaf?  To be honest this is a frequent stop for me and the beer and food always pleases.

No surprises today. So several pounds heavier, we begin our second and longest prohormones test. I begin to realize I should have salad and other fruits for a healthier life.

We now follow the Quaker Trace route, which is marked by a series of signs. While there are some sections on paths, most of this leg is composed of shared road. The route begins by crossing a bridge onto Island Park, at the confluence of the Elkhart and St. Joseph rivers, and has fantastic water views. The St. Joseph is a major river in the region. For the next 10 miles the route follows the northern shore of the river with the first third of the leg passing along a quiet street through some of the finer real estate in the area. Leaving the city, the next third of the leg is beside the river. While I find this one of the most beautiful parts of the ride, it is also the busiest. We then cross the river and enter the town of Bristol. This is a charming little town with a turn-of-the-century main street that provides interesting attractions. The final third passes through the most rural part with lots of trees and rolling hills. 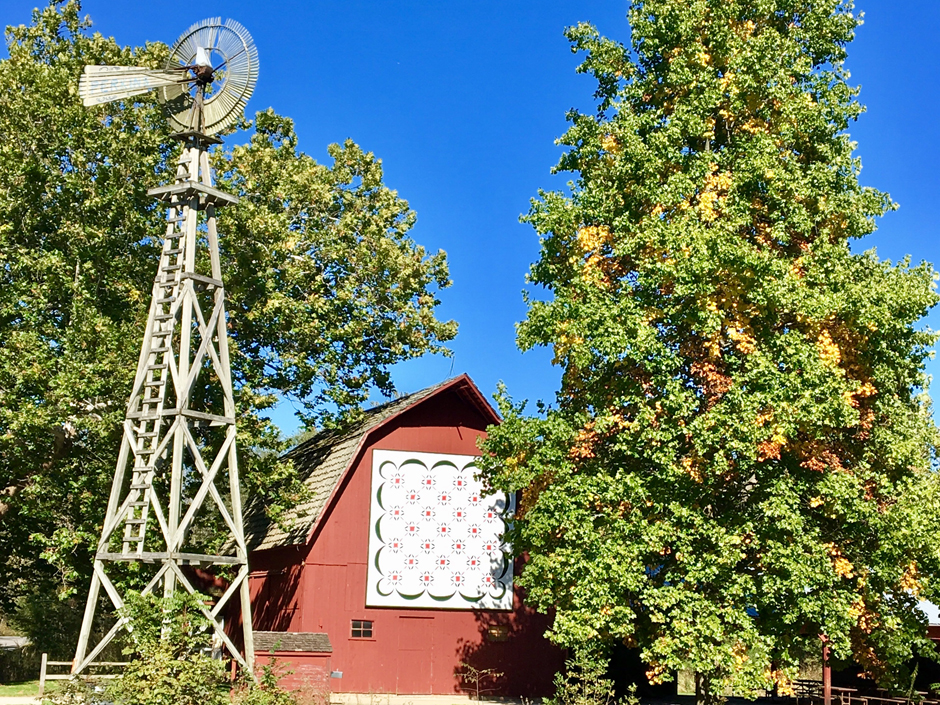 This section parallels the Little Elkhart River but there are few views of it. However, halfway between Bristol and Middlebury is Bonneyville Mill County Park. The mill, built in the 1830s, is a working mill along the Little Elkhart River and is definitely a photo opportunity. As we ride into Middlebury, Krider World’s Fair Garden is on the left. A 2.5-acre garden designed and built for the 1933-34 Chicago World’s Fair, the exhibit was removed and transported to Middlebury at the end of the fair. 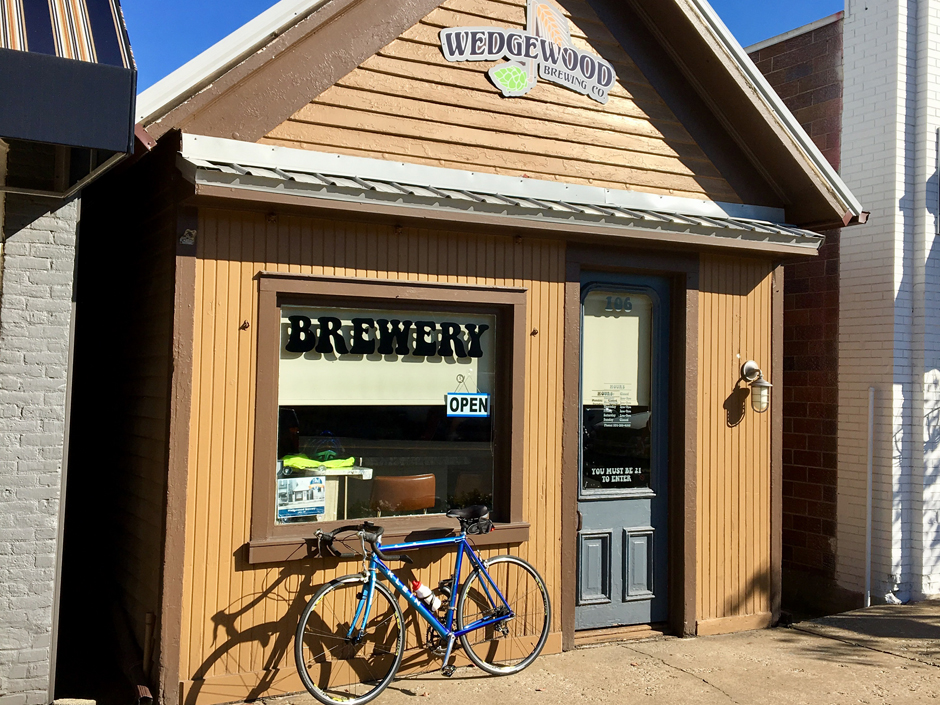 Middlebury is home to our next stop, Wedgewood Brewing Company, 106 S. Main St. This was a fun stop. Wedgewood is arguably the smallest commercial microbrewery in Indiana. Chris HIggins and his son, Cody, are the proprietors of Wedgewood. Chris and Cody employ a one-barrel brewing system and the tasting room has a seating capacity of 15, with seats at the bar for seven. The other eight enjoy their beer where they stand. The decor is turn of the century meets The Grateful Dead, and it works. The beer is very good and, as you sit at the bar, you begin to feel like you have known Cody for a long time. Wedgewood is only a block east of the Pumpkinvine Nature Trail, our 11-mile route back to Goshen. 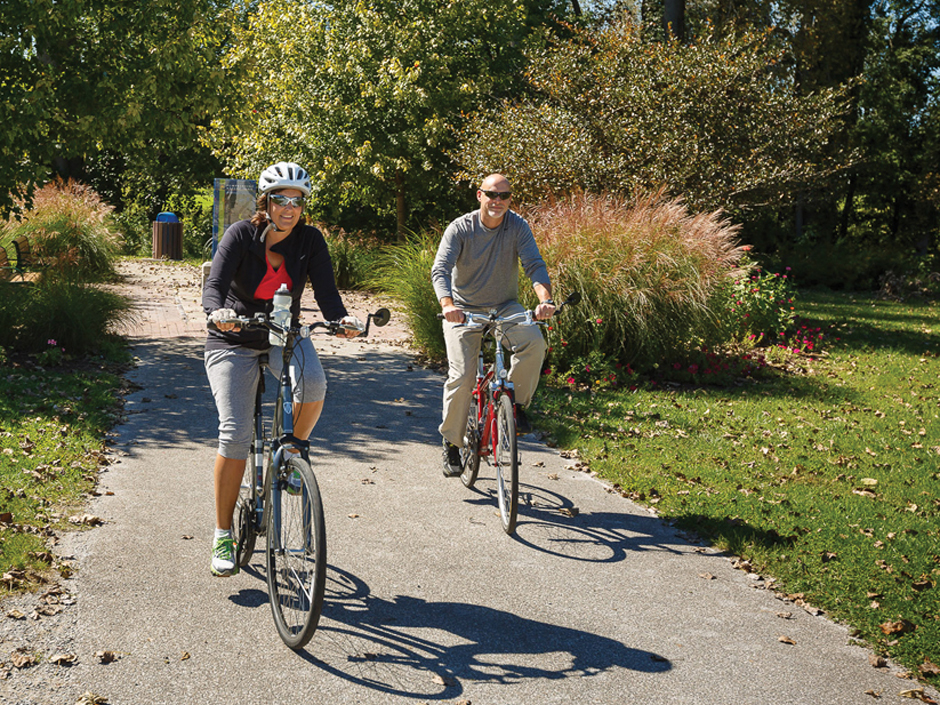 The Pumpkinvine is an 18-mile rails-to-trail linear park that is a destination amenity of Elkhart County. This is a stunning ride, passing through wildflowers, farm fields and canopies of trees that seem to go on for miles. If that isn’t enough, the last couple of miles have a downhill grade with a cold draught beer at the end. This is a trail that people drive great distances to experience again and again. Our final stop is back at the brewpub belonging to Jesse and Amanda Sensenig, Goshen Brewing, 315 W. Washington St. The building is a recycled utility building. Jesse and Amanda have successfully and artistically retained the industrial feel in the decor. They have an eclectic menu which is very popular with the locals and a nice variety of quality beer options. They also have an inviting west-facing patio which we took full advantage of while enjoying our last beer of the day.

During the course of this adventure we found many volunteers interested in re-creating this event next fall. While that likely will happen, my advice to you would be not to wait until fall. Spring in Elkhart County is mighty pretty too.

Dave Foutz is an avid bicyclist and beer aficionado, member of the Elkhart County Council and retired schoolteacher.