Al Roker loves Goshen, and Goshen loves him back

The popular TV personality’s visit to Goshen was labeled by NBC as part of the Rokerthon tour, but the scene at Goshen College on Tuesday, Nov. 10, could have also resembled Rokerpalooza.

And much like the annual rock music festival, there were plenty of sights and sounds to take in at the campus’ Adelphian Fountain. 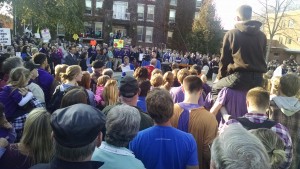 NBC weatherman Al Roker (center) was met by an adoring crowd at Goshen College on Tuesday, Nov. 10, 2015. Roker was in town as part of his Rokerthon tour of the U.S.[/caption]

Hundreds of GC students, faculty and administrators, and area residents (and one goat) crowded around the fountain for Roker’s late afternoon live weather broadcast with an Indianapolis TV station.

The crowd didn’t disappoint for the TV cameras, with a multitude of signs and banners from “Goshen is my happy place” to the Good of Goshen campaign to the Quilt Gardens Tour.

Off camera, Goshen College’s choir serenaded Roker with a version of the school’s alma mater with lyrics re-written -- including a passage “Elkhart County is a great place” -- to herald the visit.

“This is a great community and we are all the more happy that more of this country will know of that,” Jodi Beyeler, Goshen College’s director of communications, told The Elkhart Truth.

Roker left Goshen with a package of gifts from the community, including boxes of Rise’N Roll doughnuts from Middlebury.

Besides giving a broadcast boost to the Goshen area, Roker’s visit also had an unintended economic benefit. When his arrival in Goshen was delayed by three hours, dozens who had congregated on campus were left to change their plans, and many went out to lunch near campus. South Side Soda Shop was among the restaurants which benefited from a small surge in lunchtime traffic.

Watch the Rokerthon broadcast from Goshen

Terry T. Mark is director of communications for the Elkhart County Convention and Visitors Bureau.