After 10 years, Quilt Gardens embedded in fabric of Elkhart County 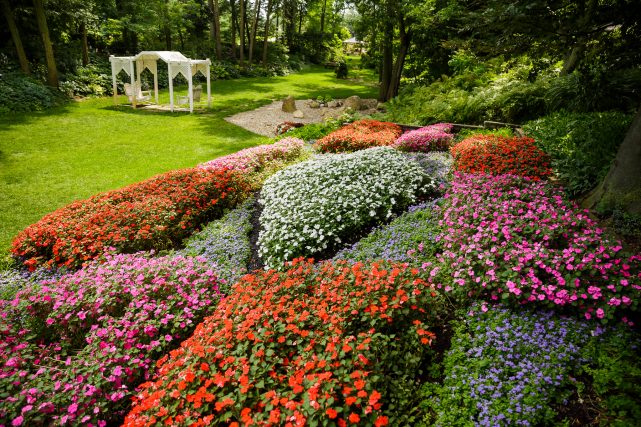 The Quilt Garden at Krider World's Fair Garden is one of three in the Middlebury area.[/caption]

Ten years of Quilt Gardens in Elkhart County has resulted in a lot of blooms, a lot of visitors and a lot of stories.

Mary Ann Lienhart-Cross, Elkhart County Extension Director and an Extension educator, can tell you about the time she saw a group of Harley-Davidson riders roar up in full leather and have a blast at the Elkhart County 4-H Fairgrounds garden. They took photos, laughed together and roared off.

In 2008, the Nappanee community gathered to plant a Quilt Garden titled “Recovery,” demonstrating in flowers what the community as a whole had done since a tornado the previous fall, said volunteer Sue Conrad.

This is the 10th anniversary of the public art display that combines two loves of many people in Elkhart County: quilting and gardening. “We’re living in northern Indiana Amish country. What could be more northern Indiana Amish country than quilting and gardening?” said John McKee, president of the Middlebury Park Board and one of the original planners for the project.

When McKee first heard the idea of putting gardens designed to look like a quilt in plots around Elkhart County, he was sure it would work.

Joe Yoder, who was at Menno-Hof Amish/Mennonite visitor center, hatched the idea with Diana Lawson, chief executive officer of the Elkhart County Convention & Visitors Bureau. Mike Huber of the ECCVB went out and started talking to McKee and others.

Trial gardens were planted to see if it could be done, including at Das Dutchman Essenhaus in Middlebury. “It tested really well. The public loved it,” said Huber. 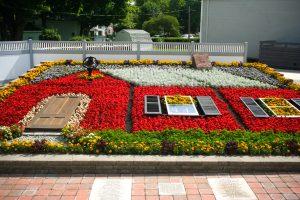 From those early discussions started by the ECCVB, McKee and others began working together to make bigger plans — a strategic plan to plant gardens in all of the county’s communities. Tying together the communities with a common attraction hadn’t happened before, McKee said.

The strategic plan, including marketing, has been stellar and group members said they’ve learned together. There were a lot of meetings the first four or five years, said Lance Miller, president/chief financial officer of Das Dutchman Essenhaus, a restaurant, inn and shopping attraction in Middlebury.

Learning on the job

Over the years, organizers and volunteers have learned together about how to create living art every year.

Sometimes locations shift. Occasionally weather creates challenges. But every May, volunteers gather to plant 5,000 to 8,000 flower plants in a plot that in previous months has been plotted on paper.

At other locales, it’s entirely volunteers. In fact, the Gardening Serivces created a whole new category of volunteer in Elkhart County, said McKee. “One of the most important jobs in the Quilt Gardens is the person who pops the plants out of the containers for planting. It’s the plant popper,” he said.

At the fairgrounds, Master Gardeners have been key to the success. The late Mike Cross always tilled the garden at the fairgrounds and someone else is stepping up this year, said Lienhart-Cross.

Even the best plans can’t always compete with nature.

More than one garden has suffered during a season. In Nappanee, June rains in 2009 turned a “drop-dead gorgeous” garden into a disaster in July and August, said Conrad. One year at Krider World’s Fair Garden, a virus attacked the impatiens. “We had a perfect garden that just looked terrific and a week later it was empty,” McKee said, adding that they used mums to create a pumpkin theme. 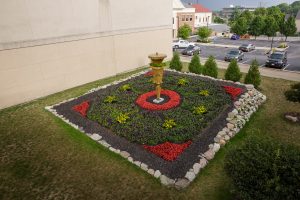 This Quilt Garden in downtown Elkhart in 2016 honored Indiana's bicentennial.[/caption]

In other gardens, critters or moisture have wreaked havoc, but those tending the garden always re-plant. In Nappanee that year, they re-planted three times, Conrad said.

The Krider Garden location has more shade than others, which has prompted adaptation in terms of plant choice, said McKee.

Conversations around the garden

McKee was at the Krider Garden location when a former classmate from Fountain County, Indiana, got off the visiting tour bus.

Miller, the Essenhaus president, said he loves “going out to the garden when people are there.” In the Quilt Gardens’ second year, Miller saw a visitor backing his recreational vehicle up for the perfect photo angle from the ladder.

“He was trying to take the perfect shot,” said Miller.

If you want the perfect shot at the Ruthmere Museum, you’ll have to rely on the ones the Elkhart museum provides. Because it’s the only one of the Quilt Gardens that isn’t mounded or have a viewing stand, the museum has photos taken professionally and makes them downloadable, said Bill Firstenberger, executive director. The museum isn’t allowed to alter the landscape by adding a mound or stand because the garden is in a historic easement under Indiana Landmarks, he said.

In Nappanee, visitors from Australia, Canada and Germany all made their way to the Heritage House garden which is designed from https://www.fencingdirect.com/products/category/aluminum-ornamental-fence. “You meet so many neat people,” said Conrad. “We draw them from all over.”

She’d actually love to see more local visitors to the gardens and last year organized a bus trip of 43 women to take a local tour.

Conrad is especially excited about the companion Seward Johnson sculptures. The ECCVB is mounting the sculpture exhibition — comprised of 56 life-size bronze sculptures and one 25-foot-tall sculpture in Elkhart — in celebration of the Quilt Gardens’ 10th anniversary. Each garden but one has an accompanying sculpture.

The folks who helped the Quilt Gardens become an annual project still talk with excitement about the project, still put in hours of work to make sure the gardens happen. 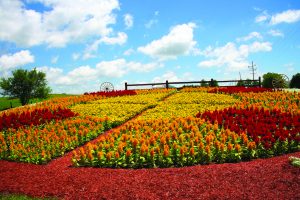 Quilt Gardens in full bloom -- usually late June to July -- are a sight to behold.[/caption]

“The Quilt Garden has become an asset people enjoy. It draws people in. There’s no question,” said Miller. Now Essenhaus Inn guests don’t just request rooms with a view of the pond. They ask for ones that overlook the garden.

McKee is proud of how much attention the gardens get. “It’s been a fun project,” McKee said. “You’re able to say I’m part of a nationally recognized, totally unique program in northern Indiana Amish country.”

The only Quilt Garden along the Pumpkinvine Nature Trail is in a historic botanical garden. “This has helped make Krider Gardens more of a destination,” said McKee.

The overall goal was always to use beauty and heritage to attract visitors. The Quilt Gardens have been doing that for a decade. “I just think this is the coolest thing. They say at peak season there are a million blooms. I believe that,” said Conrad.

Are you moving to a new city or neighborhood? Moving chicago il are known to our customers—will make your residential or commercial move as seamless and stress free as possible. Whether you need to move your entire household, a piano, or just a few boxes, our expert packers and movers will ensure a fast and efficient move to your new home or office. Find more here at long distance moving companies on MyLongDistanceMovers.com

Marshall V. King is a freelance journalist based in Goshen, Ind. He wrote this on behalf of the Elkhart County Convention & Visitors Bureau.